Toronto, Ontario – February 17, 2021 – Montero Mining and Exploration Ltd. (TSX-V: MON) (“Montero” or the “Company”) is pleased to announce that it has conducted additional exploration work to support the potential for sediment-hosted mineralization south of the granite-sediment contact within the Isabella Project area. The Isabella Project is located approximately 200 km south of Santiago and 125 km south of Yamana’s Minera Florida mine in the Southern Coastal Range of Chile. Montero’s geologists have analyzed and re-interpreted previous geological, sampling and geophysical work in the area of the granite-sediment contact and has defined initial drill targets to test areas of potential sediment-hosted mineralization. Discovery of such mineralization would present Montero with a potential bulk minable resource target at Isabella.

Dr Tony Harwood, President of Montero commented: “I am pleased to announce that Montero has completed additional geological work and geophysical interpretation and shown additional prospectivity for a significant target in the sediments on the Isabella Gold Silver property. The company continues to drill the 4 targets and a further target outlined in the adjacent sediment target and will provide updates as we progress exploration and drilling”.

Recent geological mapping by Montero geologists has aided in interpreting the granite intrusive that hosts Au-Ag mineralized quartz veins. The porphyritic granite has been identified as being of Lower Mesozoic (Jurassic to early Cretaceous) and the adjacent sediments as being marine in nature and of Triassic age (Munoz, 1993). Geological mapping revealed a texturally distinct leucocratic granite unit that occurs along the contact between the granite and the sediments in the Isabella area. There appears to be a clear spatial association of veining (shown in red) with the occurrence of the leucogranite (Figure 1). 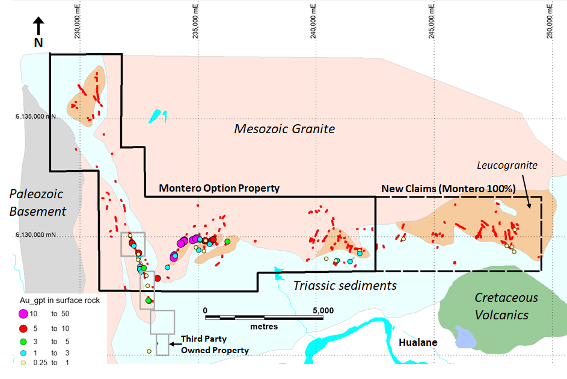 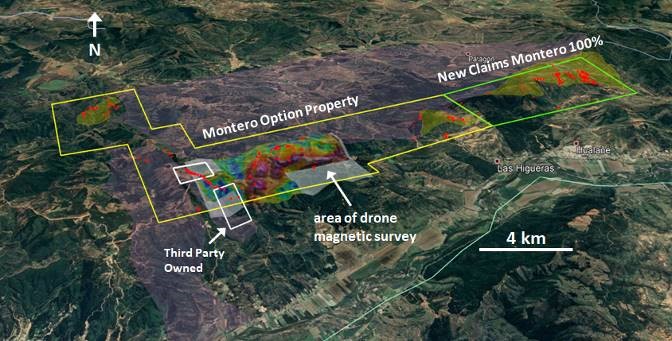 Figure 2: Isabella Property 3D Google Earth image showing extent of granite intrusive and the distribution of currently defined quartz veins (red) as mapped on surface that occur along the topographic ridge marking the granite contact with older sediments. The distribution of quartz veins along the granite contact is indicated as is the close spatial association of veins with a fine-grained leucocratic phase of the granite. The leucogranite is currently interpreted as a more differentiated intrusive phase. The area of drone magnetic survey completed by previous owner is also shown and detailed below in Figure 3.

Montero has completed additional geological mapping and further evaluation of UAV magnetic data from a 2018 survey completed over a central part of the Isabella property. The survey was completed by Santiago-based, GfDas using a drone with a potassium vapour magnetometer. The objective of the survey at the time was to obtain magnetic data for an area of the granite – sediment contact to better understand the structural controls hosting the high-grade Au-Ag quartz vein arrays in the granite. Survey data indicates that the granite is characterized by low-moderate magnetic response whereas the adjacent sediments are marked by discrete zones of high magnetics along the granite contact (Figure 3). Montero geologists have also confirmed occurrence of an area of iron-oxide rich breccia within an area of high magnetics adjacent to the granite-sediment contact and a body of leucogranite. Samples of the iron-oxide breccia returned anomalous concentrations of up to 366 ppm Cu, 408 ppm Zn and 2 g/t Ag (Figure 3).

Initial evaluation by Montero of the high magnetic zone hosting the breccias is shown in Figure 4. A 3D inversion model was completed showing that the breccias occur within a discrete zone of high magnetics within a broader magnetic anomaly. Montero will prioritize this area for initial drill testing as part of the current Isabella drill program. Initial field mapping indicates that other high magnetic zones are associated with similar iron-oxide rich brecciated sediment (Figure 5). As such, Montero will complete detailed mapping and sampling over the high magnetic zones to determine the potential for sediment-hosted base metal mineralization related to similar structural controls as those hosting the Au-Ag-bearing quartz veins within the granite. 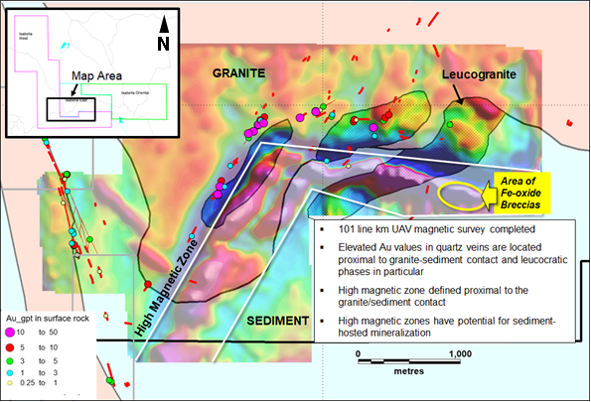 Figure 3: Displays 1st vertical derivative magnetic image for the Isabella East property. Image shows the occurrence of extensive high magnetic zones within sediments adjacent to the granite contact and the area identified for potential sediment-hosted mineralization. The distribution of surface vein sample assays results for Au g/t are also indicated as are areas of leucogranite. Figure 4 below shows 3D inversion model of the high magnetic zone hosting the breccia. 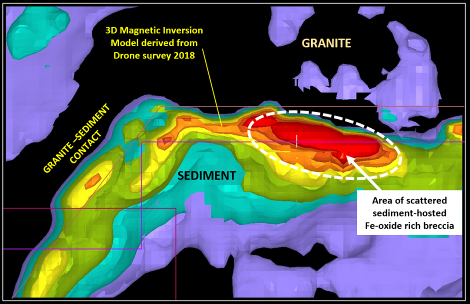 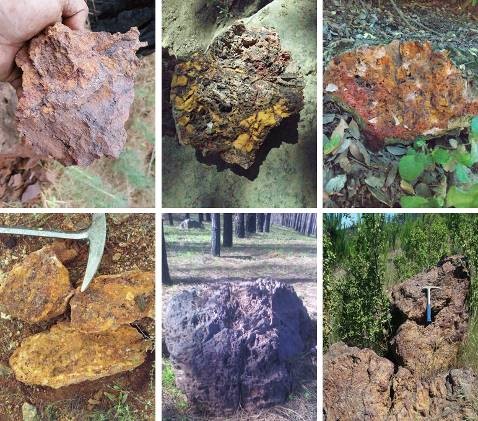 Figure 5: Photos of Fe-oxide rich, brecciated sediment boulders and outcrop (lower right) which occurs associated with high-magnetic zones in the sediments to the south and adjacent to the granite contact.

Montero is a junior exploration company focused on finding, exploring, and advancing globally significant gold deposits in Chile. The Company is in the process of relinquishing its portfolio of battery metal projects in Africa to focus on gold opportunities in Chile. Montero’s board of directors and management have an impressive track record of successfully discovering and advancing precious metal projects. Montero trades on the TSX Venture Exchange under the symbol MON and has 38,647,485 shares outstanding.