Toronto, Ontario – February 26, 2019 – Montero Mining and Exploration Ltd. (TSX-V: MON) (“Montero”) is pleased to announce the results from the Avispa Lithium discovery (“Avispa” or the “Property”) in northern Chile. Montero has been awarded 100% of the mining rights to 138 km2 (53 miles2) of Exploration Licenses over an area previously held by Spence Mining (BHP) that drilled the area extensively for copper–molybdenum. The property is located 130km from the lithium rich “Salar de Atacama” (forming part of the Chile-Bolivia-Argentina Lithium Triangle) and the nitrate-iodine rich “Caliche” deposits of the coastal range (Figure 1).

The lithium at Avispa occurs in extensive sedimentary evaporite salt deposits intercalated with fine grained clastic sediments over 30m thickness. These deposits are well developed and make up over 70% of the 138km2 Property covering over 10km north-south and over 5km in an east-west direction (Figure 2). The evaporites are horizontal and consist of three stratigraphic contiguous horizons termed L1, L2 and L3, these are between 2m to over 10m thickness. The L3 horizon occurs at the base of the exposed evaporite sequence and is overlain by the L2 and L1 horizons, respectively. The L3 horizon is the most consistently developed in terms of thickness and aerial extent on the Property. Montero is targeting a high tonnage low grade lithium deposit with iodine and K-Na nitrate credits.

Marcial Vergara conducted the geological reconnaissance of the area and initial channel sampling program over the Property. A total of 43 vertical channel samples from 24 sampling locations on the property. At each of the sampling locations the L1, L2 and L3 horizons were identified and each horizon sampled when exposed. Samples were taken as a vertical channel section over the total width of the evaporite horizon. Channel samples were taken using hammer and chisel and collected in plastic bags which were then secured and labeled. The samples weighed between 5–10 kgs and were submitted for lithium chemical analysis at SGS, Chile, with Iodine and nitrate determinations being undertaken by Sernageomin, Chile. Montero is waiting for the results of the nitrate analysis.

Dr. Tony Harwood, President and Chief Executive Officer of Montero commented, “I am pleased to announce reconnaissance channel sample results with lithium values of up to 760ppm Li2O from the Avispa Lithium Project, Chile. Iodine and strontium values are also anomalous. Montero has identified lithium bearing mineralization in an evaporite horizon over an area of 138km2 in the 100% held Exploration Licenses. The company intends to conduct further sampling and geological mapping to generate a high tonnage lithium drill target. Lithium and battery metals are forward-looking sectors in the high technology mining industry and Chile is a tier one global mining jurisdiction, both focus areas for Montero.”

The assay results show elevated values of lithium, iodine and other minerals in the L3 horizon with anomalous values in the less developed L1 and L2 horizons. A total of 20 channel samples were taken from the L3 horizon and lithium values range from 65 ppm Li2O to a high of 760 ppm Li2O. The L2 horizon gave lower lithium values from 19 ppm Li2O to 226 ppm Li2O. The L3 channel samples also show anomalous values of iodine up to 273 ppm iodine and strontium carbonate up to 3,621 ppm SrCO3. The results are provided in Table 1 below and the sample locations for lithium shown in Figure 2 and for iodine in Figure 3. 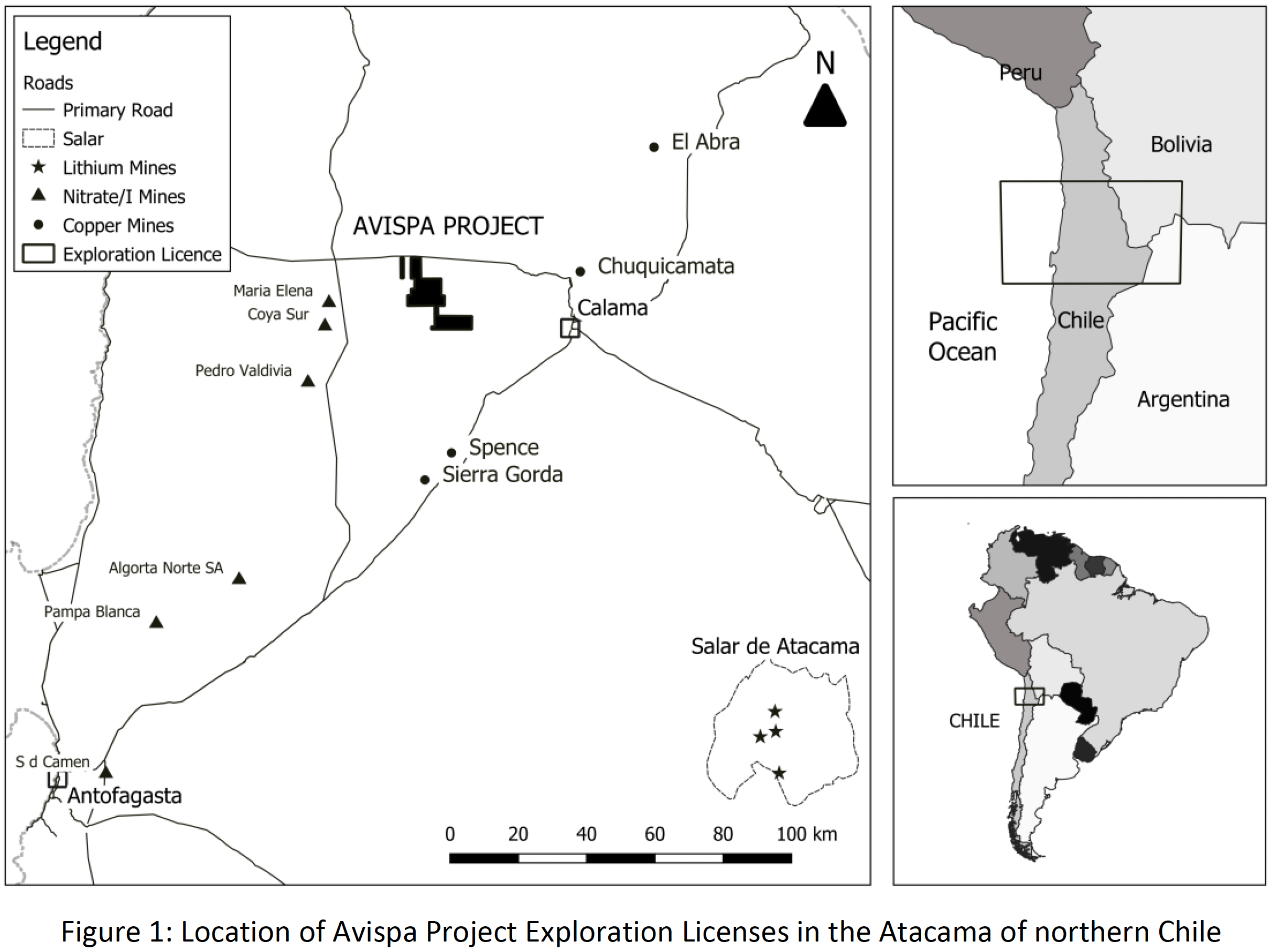 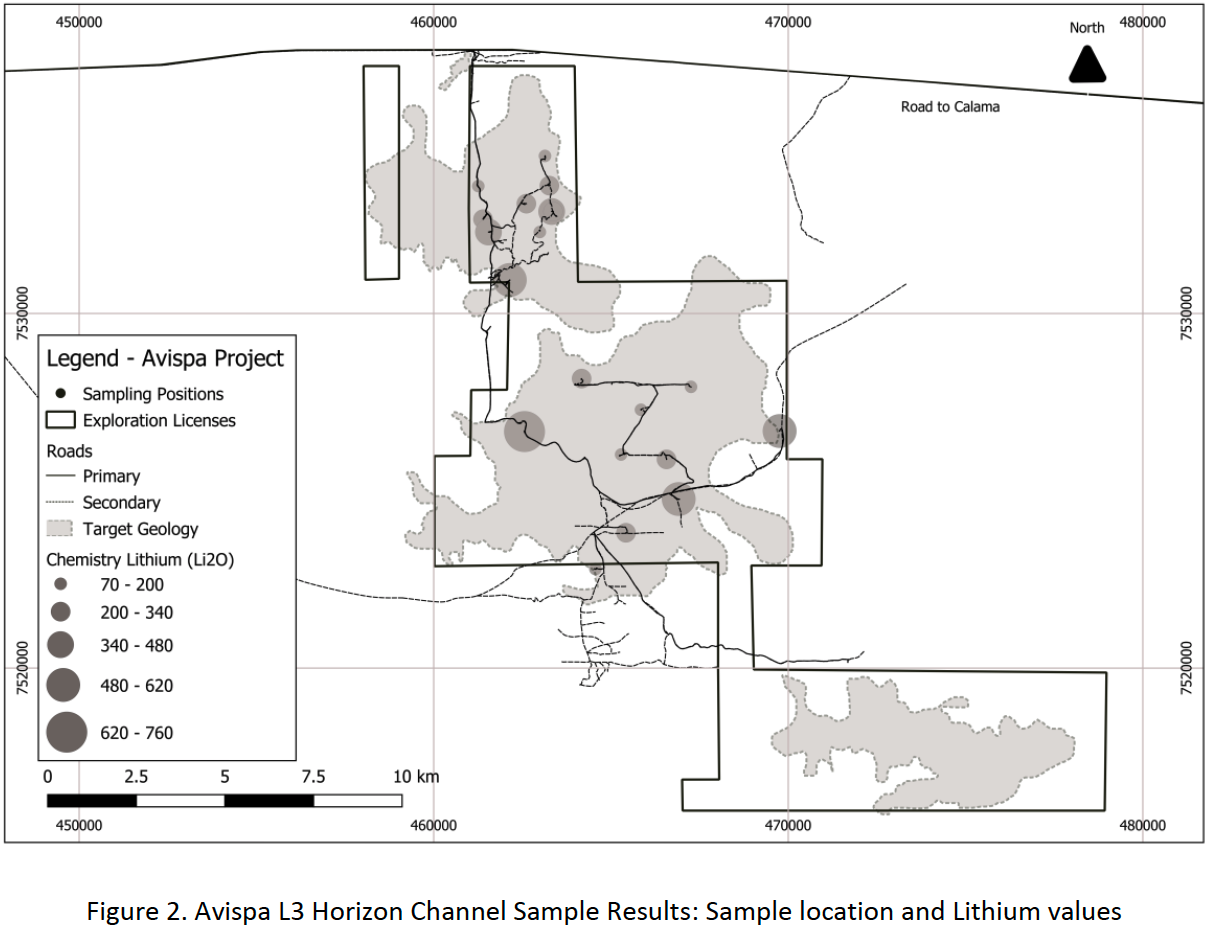 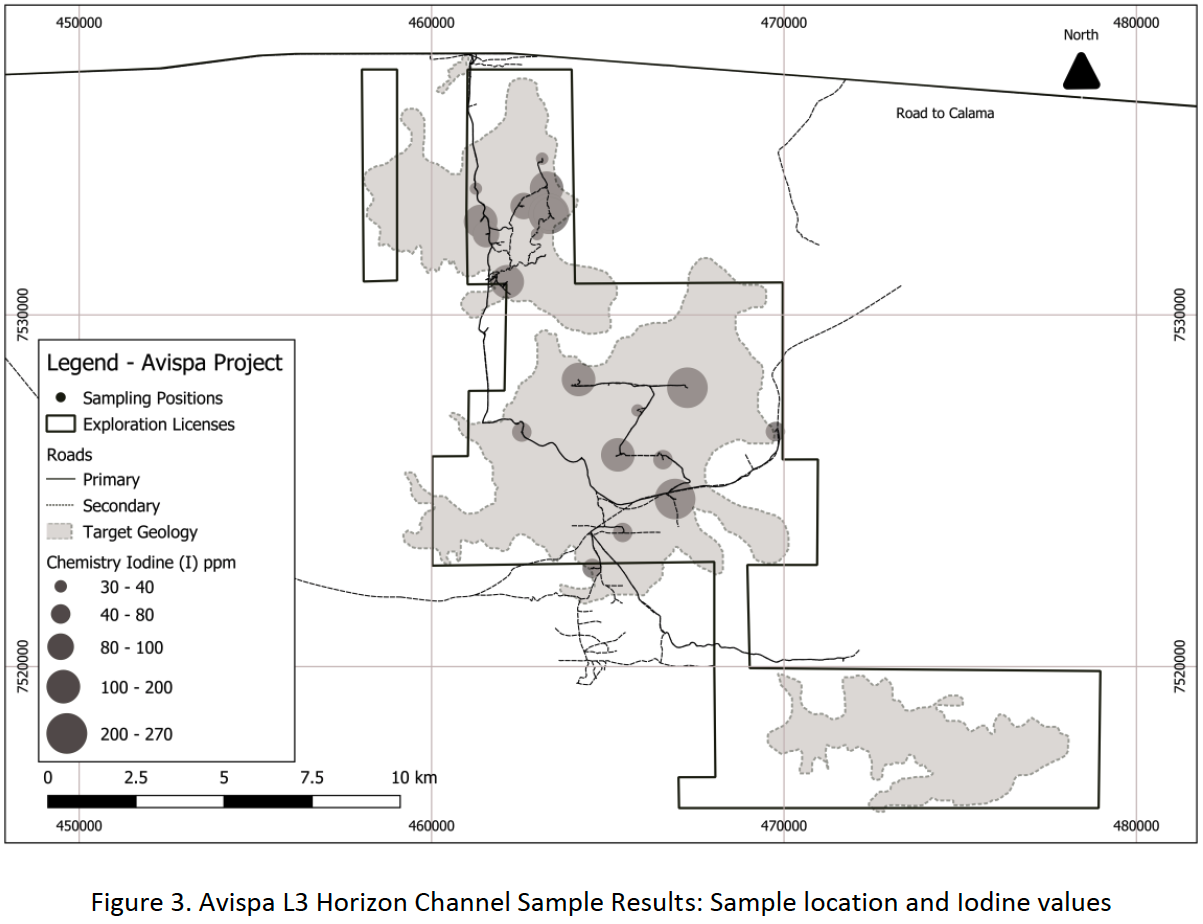 Montero has a binding agreement with a private geological consortium (“Founders”) that brought the initial concept to Montero. Montero has 15 months to complete due diligence and once completed the Founders shall be granted a 1.5% net smelter royalty and $100,000 Montero shares, subject to regulatory approval. The Founders shall be granted a further $600,000 of Montero shares, subject to authority, once Montero determines if the material can be mined and processed economically.

Montero appointed Sr. Marcial Vergara, a Qualified Person for the purpose of National Instrument 43-101, to review the geology and to undertake the sampling program to confirm assay results and expand into areas not yet sampled. Further updates will be provided.

This press release was reviewed and approved by Mr. Mike Evans, M.Sc. Pr.Sci.Nat. and Sr. Marcial Vergara B.Sc. Geology who are qualified persons for the purpose of National Instrument 43-101. Sr Vergara is based in Santiago and has more than 30 years’ experience with lithium exploration experience in Chile, Argentina and Bolivia.

Montero is a mineral exploration and development company engaged in the identification, acquisition, evaluation and exploration of mineral properties in Africa. Currently the company is focussed on advancing its battery metals exploration projects for lithium and tin-tantalum in Namibia. Montero also has phosphates in South Africa and rare earth elements (REE) in Tanzania. Montero trades on the TSX Venture Exchange under the symbol MON.