The global demand for electric cars on the rise and the requirement for lithium in long-life batteries is accelerating. The lithium market is about to boom exponentially and the demand for lithium mining production is increasing significantly. Many automakers are forward thinking and going totally to manufacture electric vehicles as soon as 2020. 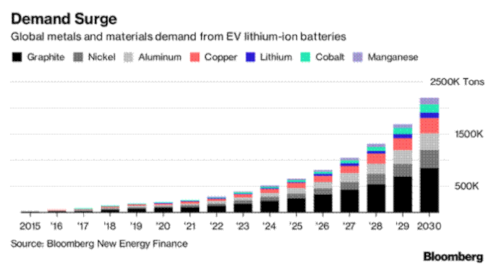 Global battery manufacturing capacity is set to double by 2021

Conventional engine fossil fuel costs are high and electricity is by far a cheaper and a longer lasting alternative with all the advantages of a clean source of power. Electric cars are mechanically much simpler, with electric motors compared to combustion engines with added benefits of less noise and pollution, and more torque.

Technological advances in batteries is allowing them to hold power for a longer time period allowing cars to have an increasing range and the price of EVs has come down significantly.

The “Big 3” car companies and automakers around the world are ramping up EV production and the battery manufacturers are searching exhaustively for raw materials, particularly lithium. 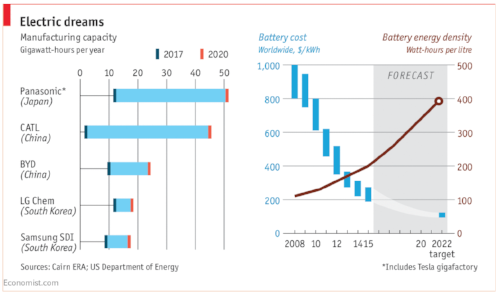 The Role Lithium Will Play in the Future

The lithium market is under-developed compared to most other industrial commodities, leaving a value space for a select number of companies to find and develop economic lithium deposits. Lithium has many types of applications, from lubricating grease and glass fabrication, to glazes for ceramics, and most importantly, batteries. Lithium is predicted to continue to play an increasingly important role in the battery-powered clean air future for at least the next 20 years.

Geology is important for processing

Lithium is present in a number of different minerals, but for those interested in commercial extraction, there are really only a few deposit types that are of interest. Pegmatites are commonly found throughout the world, but lithium-rich granite Lithium-Caesium-Tantalum (LCT) pegmatite intrusions are much less common, making up less than 1%. These type of ore bodies are the hard-rock source of lithium. The lithium minerals that occur in the LCT granite pegmatites are spodumene, lepidolite, cookeite and amblygonite. Spodumene is the most commonly occurring lithium hard-rock mineral and was once the main source of lithium metal globally. This has now been surpassed by lithium in brines which have become the largest contributor to lithium production.

Lithium hard-rock recovery involves the following key steps: crushing of the ore, concentration by gravity and or froth flotation, to produce a lithium concentrate followed by hydrometallurgy and precipitation of a lithium chemical. This is typically lithium hydroxide or lithium carbonate, which can be sent to factories to be manufactured into its final form.

Lithium is also recovered from brine solutions in the “Salar Brine Deposits” of the “Lithium Triangle” in South America covering parts of Chile, Argentina and Bolivia.

Lithium from these brine deposits are a major source of global lithium supply making up approximately 50% of global lithium production. Montero has made a lithium discovery in the “Lithium Triangle” of northern Chile where the lithium occurs in evaporate salt deposits that are consolidated sedimentary horizons over an extensive area in the Exploration License area secured by Montero.

Grade is arguably the most important figure in any type of deposit. Typically, spodumene is the highest-grade common lithium mineral and easiest to recover. Coarser minerals are also better for processing. Also, by-products can also add value to the deposit, including tantalum, niobium, tin, beryllium and caesium. High concentrations of impurities (non-profitable by-products) can lead to higher refinement costs and could limit their use in end use applications, such as glass and ceramics.

Grade and amenability to metallurgical recovery are arguably the most important figure in any type of deposit. The nearest mining analogy to the lithium occurring in salt evaporite deposits are the “Caliche” mines of SQM and others that mine for iodine and nitrates of potassium and sodium in the western Atacama of Chile.

Lithium provides the best combination of energy density (weight to power ratio) and price with current technology. Currently, there are an estimated 80 different lithium-ion battery chemistries in production, with these varying chemistries all exhibiting different characteristics, such as capacity and voltage. Lithium is typically found in the cathode of the battery, commonly in the form of lithium cobalt oxide, while the electrolyte is commonly in the form of lithium salts. The anode material is commonly carbon-based, with graphite being the most popular. Lithium ion battery’s output is around 3.6 volts, which is more than twice as much as its alkaline cousin.

Demand for 2025 is projected differently, not only in overall demand tonnage, but in the percentages each application encompasses. The future is expected to be bright for batteries in the non-traditional markets; electric cars, e-bikes, and energy storage.